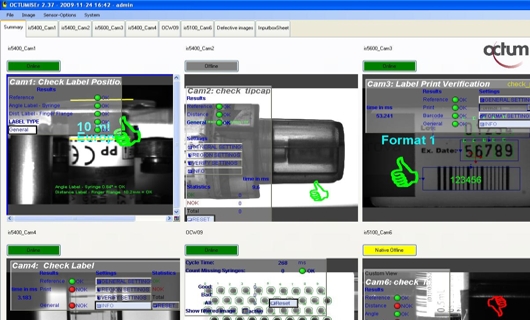 The continuing positive economic development in 2011 led at Octum again to a new best fiscal year in the company’s history. Octum reached an increase in turnover of more than 30% and an increase of more than 35% in incoming order volume respectively compared to 2010. Development of earnings was also very positive.

This overall positive business development enabled Octum to further extend it`s employee base as well as increase the spending’s in R&D. New applications in surface defect inspections, 3D inspections and 2D measurement for the automotive industry could be implemented. At the same time the turnover from the pharmaceutical & healthcare industry could be increased with new or redesigned applications providing more functionality at higher speeds. Turnover from direct export increased as well.

Besides of the two trade fairs Control and Motek, the technology & user day hold at the Audi Forum Neckarsulm together with the Audi plant tour was for sure the highlight of Octum`s events in 2011. The feedback gained from the participants will be used to further optimise future events of this kind.

Octum is looking forward to new and challenging applications in the new fiscal year and thanks to all it’s customers for the fruitful cooperation in the past year.