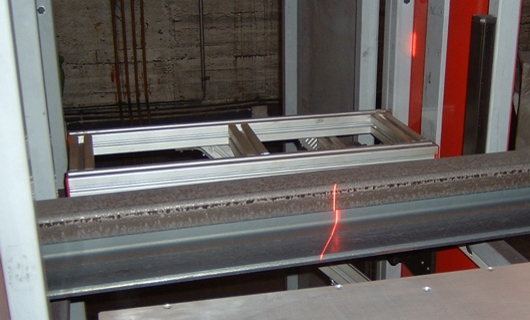 In rail manufacturing 100% identification of any single rail segment is a must. For this identification there is a standardized marking according to DIN EN 13674-1-2008 with eight alphanumeric characters. The characters are stamped on the side of the rail, marking is repeated in a distance smaller than 5m on the whole length of the rail of up to 120m. In the manufacturing process this marking needs to be identified with a high level of confidence. Additionally the length of the rail and the right position of the stamping on any single segment over the whole rail have to be verified. The reading station must cope with the harsh environment with rust, vibrations and shape & surface variations of the rail. Furthermore variations in the stamping process lead to  big variations in appearance and shape of the characters. Rails are transported on a roller conveyor with some lateral guidance at speeds up to 1,5m/s.

The implemented solution uses a fast 3D laser triangulation camera for 3D data acquisition. The image acquisition is synchronized with the rail speed to get constant triggering intervals even with changing rail speed. Any 0,1mm a new 3D acquisition occurs. At the maximum speed of 1,5m/s the camera works at a scan frequency of 15 kHz delivering simultaneously 3D and intensity data of 16 bit each. Over the whole length of the rail of up to 120m, a huge volume of data is generated for processing. Detection of the character block is very difficult especially in the first segment of the rail due to big depth variations. Segmentation of the individual characters is performed with adaptive 3D thresholding methods.  In a next step the classification of the characters is performed by the use of statistical and fuzzy algorithms. Finally the identified character set is transferred to the control stand at the finish of the reading cycle. To achieve the requested performance data continuous image acquisition takes place in a backround  task while processing of the up to 1.2 million of 3D images per rail is performed at the same time continuously in another task. To cope with the variety of character appearances, statistical methods apply already during the learning process of new characters or new shapes of existent characters.

3D OCR systems for rails are in use at a German rail manufacturer since the beginning of 2011 and in several plants worldwide in rail wheel manufacturing since 2004. These systems have proven their capabilities in a harsh environment at high speeds of up to 15.000 3D images/s and depth resolutions up to 10µm.