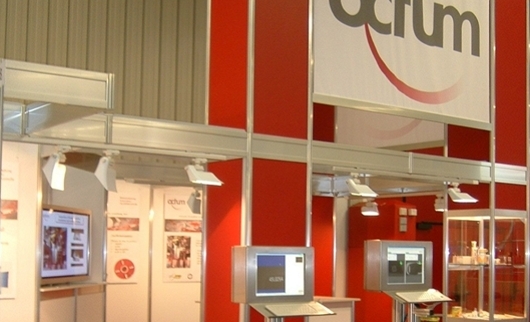 Octum exhibited this year for the first time at the international Packaging trade show FachPack 2010 in Nürnberg. Octum`s focus was on track & trace applications for the pharmaceutical industry.  Octum displayed OCR / OCV based on it`s CV-Inspect software as well as the 21 CFR part 11 version of it`s OCTUMISEr HMI software, with one smart camera performing vial inspection networked with another smart camera reading DMC. Visitors were interested as well in 3D inspection especially 3D packaging inspection. The results of this trade show were so positive that we decided to exhibit also on the coming FachPack trade shows.

Traditionally Motek in Stuttgart is one of Octum`s most important trade shows in the second half of the year. Besides of the exhibits displayed on the booth, our presentation at the trades shows forum „ 3D Inspection in production – a economical investment“ gained positive feedback. Most of the requests we received from the attendees were concerning surface defect inspection. The No. of visitors at our booth increased 2010 by 20% compared to 2009, this is why we expect positive turnover developments for the coming months.